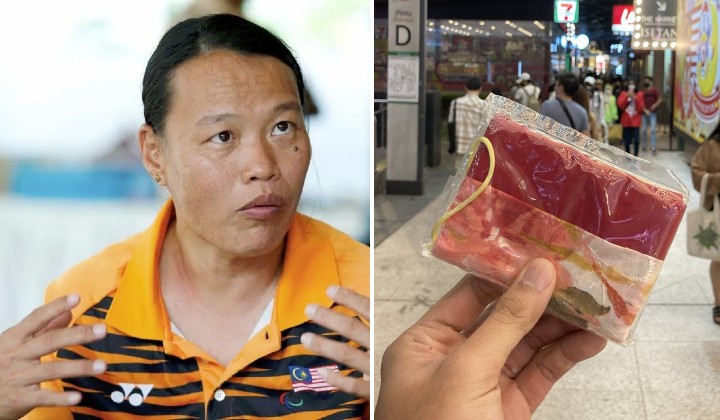 Koh Lee Peng once brought glory to Malaysia as a top Paralympic athlete. However, now at the age of 48, it seems that our country has failed her. She is forced to sell tissue covers on the roadside to survive.

She was also holding a battered newspaper clipping of herself, with the headline reading “Former OKU Paralympic Swimmer Scorned”.

She introduced herself as Koh Lee Peng from Penang and claimed that “she is not ashamed of her current job (selling tissue covers)” even though she was one of Malaysia’s best and brightest just less than a decade ago.

Koh even told @fxwxb that he could look her up on YouTube if he did not believe her.

The present and the past

It turns out that just a few years ago, the story broke that she was heavily scorned while selling tissue packets in her hometown Penang.

According to Berita Harian, she had been insulted and ignored when she was selling tissue packets in Bukit Mertajam, with locals calling her ‘part of a syndicate’ or claiming she was an illegal foreigner from Vietnam, Thailand, or the Philippines.

Koh is confined to a wheelchair and cannot use both legs. While previously she held an office job, the workplace was located in a building without a lift, making her daily life extremely difficult.

Without another choice, Koh had to turn to the street to earn a living.

In 2019, after her plight made national news, she and fellow Paralympians were awarded cash and a token monthly allowance of RM300.

Her plight is common for former athletes

However, her story isn’t uncommon. In April 2021, a Vice documentary exposed how retired Paralympians are treated in Malaysia, drawing huge criticism from Malaysians.